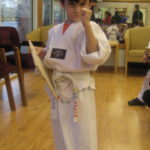 Last night I watched my 12-year-old son break a board with a forceful spinning reverse side spin kick.The board broke in half as two adult male classmates held it tight against the force of my son’s menacing foot. Conor is in the midst of midterm-testing to achieve his second-degree black belt in Tae Kwan Do. He is also in the midst of a growth spurt and now towers over me by several inches in height. And I am in the midst of getting used to the idea that my little boy has transformed into someone different through the passing of time and early adolescence.

It’s strange to realize that I now have a new tenant under my roof. Same kid, yet different. This one is more independent than the previous free-loading child who always needed help finding everything and constantly requested that I watch cartoons with him. He’d beg that I partner with him in defeating the Mario Brothers villains on the WII console. We’d sit side by side in the family room trying to defeat Bowser, Dimentio, and Kaos. I was the better player then. That little boy found no fault in me. I was cool and beautiful and was greatly needed. I was his source for all matters in life.

My new tenant is also more self-sufficient. He has a deeper voice and has his own sense of style. He now claims a gaming room in the basement of the house where he slays all matter of villain and foe on a wide screen using a neon-lit keyboard. I am now a mere guest in that room. His partners now are adolescent voices that come through on headset speakers while he pilots them all through combat war zones. These are also now the voices he listens to on matters of life. His information council is made up of same-age kids who’s view of the world does not go beyond 13 years of life experience.

Although I know my son still loves me with all his heart, I am now just a “mom.” I have no more magic powers. I am asked not to try to use terms that I consider “cool” and he considers terms older than the era I was actually born in.

This transformation did not happen overnight. It was gradual. While I was pining for more independence from the needs of my kid, he was creating slack on the line that kept us tied together. I felt it one Halloween night when he was about to turn eight-years-old.  He insisted I escort him and his friends as they trick-or-treated through our neighborhood like I did every year. This time, I was asked to wait in the darkness of the street while he and his costumed buddies knocked on doors. As the night went on, I found myself being left farther and farther behind the group of kids I was supposed to be escorting. They ran toward the houses not looking back for the security of my presence. Soon, I was walking back home alone while in the near distance I could hear their laughter in the darkness of night.

We all breathe a sigh of relief when our kids hit a certain milestone in age. In our haste to help them grow up, we fail to record the moment when we last stopped holding their hand as they crossed the street or the last time we are asked to read them a bedtime story. I couldn’t wait to get rid of that darn car seat in the back of my car. Didn’t record the moment I chucked that monster either, but I know I was happy when I did it.

I also did not record the day when suddenly, there is this new person, bigger and older now sitting in the front passenger seat of my car. He resembles the kid that used to sit in that car seat I chucked. He messes with the radio dial settings like he belongs there. I look back and notice the empty spot in the back seat. For a mere second, my heart feels like that Tae Kwan Do board split in half. When did this happen! It’s a bittersweet moment until I’m brought back to reality by my son’s voice. “Mom? Mom? Mom? Can we go get some fries?”

12 comments for “A mom’s growing pains”